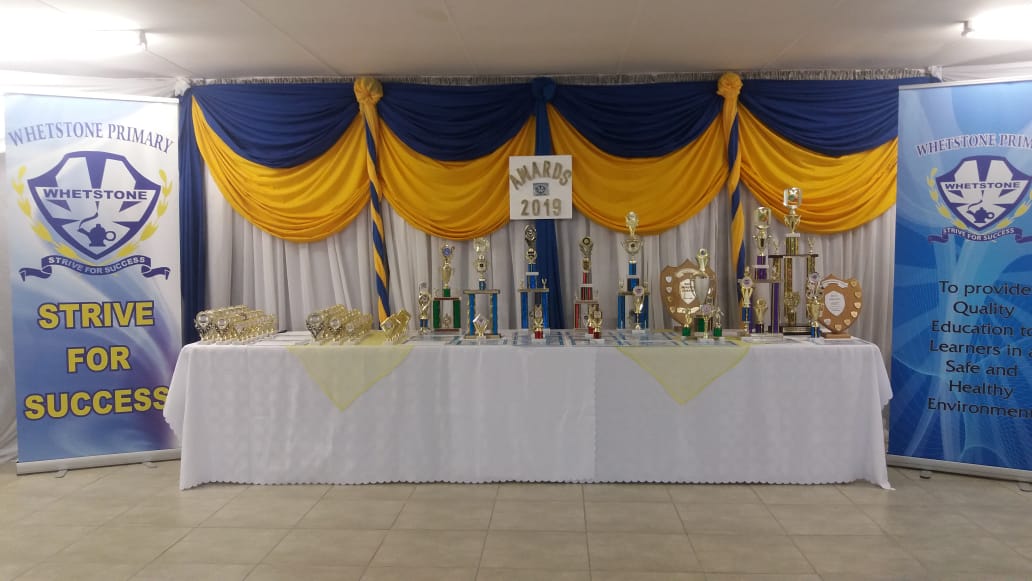 Whetstone Primary School, believes that every child is worthy of praise and every child has a special gift worth noting. The school’s Speech and Awards ceremony took place on the 27 November 2019, in their school hall. The Awards event acknowledged the tremendous achievements of the learners across a whole spectrum in education at the school. It was a day to honour, celebrate and accolade not only the learner’s academic success but also the educators’ role in the life of the school.
The atmosphere at our Awards can only be described as euphoric. The support from the School Governing Body, the parents and a team of dedicated staff were amazing. The event started with the rendition of the National Anthem by the school’s choir. Among our top learners, special recognition went to ELIJAH BASTIEN SAMPSON, who was the recipient of the Dux Award 2019. He also scooped eight of the nine subject awards, the Good Fellowship Award and the Inter-Sen Speech contest trophy. He was instrumental, together with his team, in overcoming tough competition from Tongaat, Verulam and Phoenix. Elijah Bastien Sampson, head boy 2019, certainly did our school proud. The foundation Phase also excelled in the speech contest. This team were the overall winners from Tongaat, Verulam and Phoenix circuits. An excellent achievement. Special awards were presented to many learners .Among others, the Pharmaguild Award went to Joslyn Natalia Pillay. Olwethu Andiswa Khoza was the proud recipient of the principal’s Award. Kreolen Pillay was Whetstone Primary’s, Sports Person of the year. It was a proud moment for Fareeha Mohammed, a grade R learner, to receive the School Governing Body Highest Fundraiser award. She, together with her parents and grandparent raised an outstanding amount of R55 850. Mr.T.Chetty, the school governing body chairperson was full of praise not only to Fareeha, but also to the community at large for their fundraising drives. Many other awards were presented and we place on record our congratulations to all these awardees. The learners and parents were entertained by dances that brought forth a Christmas theme. It was indeed a memorable day .The co-ordinator Mr.K.Perumal placed on record his sincere and heartfelt thanks to the acting principal, Mrs V Pillay and all role players for a successful event. Special thanks goes out to the committee members, Mrs.S.Govender. Mrs.V.L.Chetty, Mrs.J.Harripersadh and Mr.V.Budhai.